A Night at the AUG

The cab driver turned towards me in his seat. “Are you sure this is the right address?”

I looked at the directions I printed before leaving the hotel - 1001 South Main Street. “It’s the one they gave me. Maybe it’s that building over there.”

“Okay. This neighborhood can be a little sketchy. I can walk up to the door with you while you make sure.”

This seemed an inauspicious start to the revival of the Las Vegas Atlassian Users Group (AUG). When I received the invite for the meeting being sponsored by Isos Technology, the timing was perfect. I was already planning on being in Vegas to bid adieu to my 30s, and this meeting fell on my last night at 39. I figured the evening would be smooth sailing when I grabbed a taxi after leaving my wife at the spa.

Now I was rethinking the wisdom of my decision, especially given the reluctance of the cabbie to leave me in the neighborhood, despite his shift having just ended. Of course this wasn’t the worst decision I had made that evening, though I didn’t know it at the time.

The Raster Media building, our host for the evening, looked more promising than the buildings leading up to it. The frosted windows had a list of technology targets, so I hoped I was in the right place. Looking through the frosted window on the way to the door I recognized the familiar silhouette of Christian Goetzman. I gave the cabbie a thumbs up, and an extra $10 dollars for ‘hazard pay’, and stepped through the doors.

I was greeted by the familiar assemblage of tech workers I had been expecting. The office itself was a pleasant combination of functional work and play areas favored by those involved with software and services. Large conference and meeting areas blended with developer-centric spaces ina way reflective of the resurging arts district housing Raster Media.

The revival of the Las Vegas AUG had over 30 attendees in the large meeting room. Coming from the smaller attendance seen in the Phoenix AUG meetings, this was a welcome change for an Atlassian Expert event. 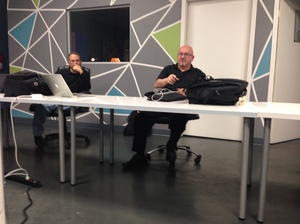 The first speaker for the evening was Steve Cross from Atlassian. Steve lived in Las Vegas eleven years before, but had been recruited to the Bay Area.

Before jumping into his presentation, Steve made an announcement that Isos Technology had been looking forward to for a while but had not been expecting this evening - Isos Technology now had its Atlassian Enterprise Badge. We are now one of three companies in North America with this badge, denoting our status as elite providers of Atlassian services.

After letting his announcement settle in, Steve moved on to the meat of his presentation. He focused on items that were announced at Atlassian Summit. Some of his highlights included:

Thad West was up next as a break between the two speakers for the night. He brought up scheduling for the next Las Vegas AUG. Currently we are planning on a January session.

The second speaker of the night was Ed Bukoski from JPMorgan Chase. Those of you following my blog entries will remember my ‘Atlassian the Groovy Way’ blog entry. That entry recounted Ed’s dry run of his presentation on how to access Atlassian tools through Groovy. Tonight we got to see the polished product, and it was worth the trip. Ed was not bogged down by incessant Java questions during this time, allowing him to focus more on the Atlassian side of the presentation. It was very worthwhile to watch the evolution of Ed’s sample application evolve over the course of the presentation into a web application that allowed the manipulation of Jira tasks.

After Ed’s presentation ended, there was the general mingling that occurs at the end of any users’ group. This was followed by the inevitable slow trickle of people to their homes since this was a Thursday evening and it was 8 O’Clock.
I know what you are thinking - Aren’t there always three acts? This really can’t be how the evening ended, especially in Vegas.
Well... you are right.  On to the third act!

As the attendees thinned out and the Isos contingent of Thad West, Danny Riley, Mike March, Christian Goetzman, our guest Ed Bukoski and I contemplated what to do with the rest of our very early evening. George Moncrief, one of the founders of Raster Media, asked if we wanted to see some of the places members of the local tech community frequent. Given our lack of concrete plans this was an attractive offer.
So we loaded up in two cars and headed for downtown Vegas. 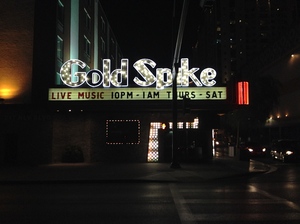 Our first stop was the Gold Spike. This large bar and lounge was perfect for the more laid back approach to nightlife with a combination of games favored by those with a technical mindset, such as the 6-foot tall Jenga tower. Some in our group were especially interested in the Airstream trailer parked on the back patio of the bar.
Next up on our tour was one of the most unusual environments any of us had ever ventured into. We were led down the street from the Gold Spike to the nearby lobby of The Ogden. Walking through the doors, we must have looked like developers. The receptionist and the elevator attendant asked if we were here for the Downton Podcast - which we apparently were. We were told it was on the 18th floor as we entered the elevator.
Stepping out of the elevator on the 18th floor, we were greeted by a long hallway of closed condo doors. We followed George down the hallway to the door at the end, shooting puzzled glances at one another. Being ushered down an unknown hallway to an unmarked door in an unknown building in an unfamiliar city is, under most circumstances, not advisable. 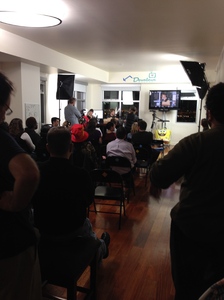 Opening the door, we were greeted by a mass of Vegas tech community members. George pointed out the timeline wrapping around the wall listing various local tech startups. The hardwood living room area was filled wall to wall with prop laden chairs, cameras, lighting and a desk. After some mingling, Pawel Szymczykowski, the cat wrangler for this evening, used the power of his vuvuzela to get everyone in their seats. We were not exempt from this pied piper. If you look carefully at the video introduction for episode #44 of the Downtown Podcast, you will notice a row of Isos faces.
Staying for the recording of most of the podcast was an interesting experience from what we had expected in Vegas. However we wanted to see more of the changes that have been wrought in downtown Vegas before our evening ended, so we headed downstairs to continue on with our tour of the local area.
George and some of the other Raster Media folks showed us more of the revitalization of the area brought on by the growth of the Vegas tech community. The influence was obvious in some of the choices of bars and stores which had gained a foothold, such as the bar devoted to video games and the large collectible toy store.
Unfortunately I missed the end of the third act. Remember my mention of a bad decision I had made during the evening (I bet you thought I forgot about it)? It came well before I gave the cabbie the address of Raster Media. One of the first things I did when I got to Vegas was grab some lunch at Julian Serrano, something I always make sure to do when I’m in Vegas. The menu is very interesting, and I always try a few new things when I go. So when I saw that one of the dishes contained squid ink I was sold. My wife pointed out that this didn’t sound like a good idea, but my mind was made up. And that’s what ended my evening (as well as torpedoing any meals I would eat on Friday).

Everyone from Isos had an enjoyable end of the evening and made it back to Phoenix with all body parts accounted for. We felt very welcomed by the friendly Vegas tech community and are looking forward to our expansion there.
I would like to offer special thanks to: