How to Migrate from CVS to Git: A Step by Step Guide 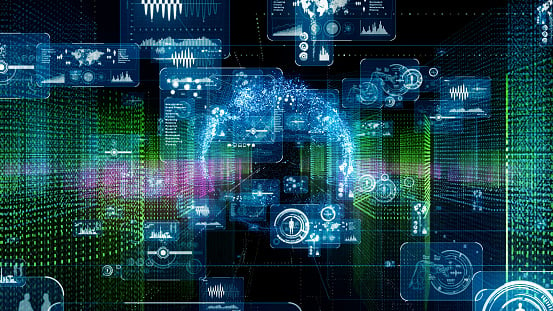 Sometimes during a long running client project, you get to make a big exciting change that benefits you as a developer. Most of my career has been dedicated to helping clients evolve their projects by introducing new frameworks, migrating platforms, etc., all while continually developing new code to add long-desired functionality for their end users. However, the day had finally arrived when I was tasked with moving a code base from a CVS repository to Git... and I was anxious to get started.

Since I hadn't made this conversion before, some research was necessary. I already had a few key objectives in mind:

There were a few choices to be made in how to accomplish this. I had a PC workstation to use and in order to get access to all the tooling necessary to make the conversion, a Linux environment would be needed.

The quickest and easiest way to do this was to use a virtual machine with Vagrant. This would allow me to do the conversion and then quickly discard the virtual environment without any traces left behind.

After setting up my quick and easy Ubuntu Linux environment, I had to now choose the exact conversion software. After researching a few solutions, I chose to use git-cvsimport as it provided a direct path from CVS to Git without any intermediate conversions. Additionally, I found these two resources which would give me the necessary commands:

Thought Process: How do I Structure the Git repo(s)?

Now that I had my environment set up, I needed to take a step back and figure out exactly how my project would be set up in a Git repository. I needed to convert a portal project which was structured as a couple dozen individual WAR projects, each containing one or more portlets, shared code Java projects that are packaged as JAR files within the portlets and a couple of other supporting Java packages for various functions outside the portal.

In my case, this question was answered by the way code changes are made and deployed to the portal.
Since code is released all together and any code enhancements to the portal may span a couple of different portlets, it makes sense to package this all under one repository.

Put another way, there would be a 'root' parent folder with each project existing as a subdirectory underneath it.  I searched for an easy (yet proper) way of handling the merging of repositories.  I looked at various solutions like Git submodules, but they didn't seem like the correct approach for what we were trying to accomplish. Then I found an article showing a simple merge of repositories into one repository and it looked like the most simple and straightforward way: Merging Two Git Repositories Into One Repository Without Losing File History.

Now that I had done all necessary reading, researching and talking with colleagues, I knew what the final structure would look like and how to implement it. 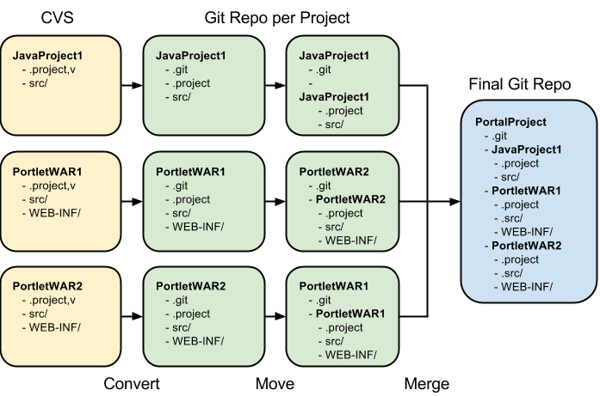 NOTE: If you're running Vagrant on a Windows box and you don't want to mess around with configuring the SSH client or keys, just use PuTTY or a similar SSH client and log in with following credentials:

2. Make sure all the code is checked into the HEAD stream in CVS

Since restructuring would occur as well as changes to how branching would be handled, we’d want a everything on the main trunk in order to re-branch later in Git. I made sure all code was checked into the CVS repository and that the production release was merged in the HEAD stream. As you can imagine, the best time to do this conversion is when you're completely done with a development release cycle.

3. Create tarball of each CVS project along with CVSROOT folder

Since having remote access to CVS is not good enough, we needed a copy of the CVS folders (full or subset) required for conversion. In this example, we tar up a subset of the remote CVS server's applicable directories.

4. Convert each project folder from CVS to individual Git repositories

Copy the newly created tar files to the easily accessible 'migrate' folder within your Vagrant folder which will be accessible through its Linux instance. To keep it easy, expand the tar file into the same location as on the CVS server.

Q: Why create an author conversion file?  A: So that your Git repository will have an accurate representation of the authors of each change in the repository.
If you have all the names of individuals who have committed changes to the CVS repository, then this step is easy. Just create a new author conversion file (author-conv-file.txt) with the following format: (For consistency, the user IDs should match the user store that your final Git repository is using so that all new development going forward will have matching names. If your CVS repository uses a different user store resulting in differing user IDs, you'll need to find out what the Git user IDs are. If you're able to create this file, skip to section 'Conversion process with cvs-import'.)

Be sure to remove the converted folders before continuing with the next section.

With your author conversion file, you can now execute the final conversion.

8. Restructure each project to subfolders

Since we determined all projects would be living under a new parent folder, move all contents of projects into a subfolder of the same name. This process is repeated for each project folder git repository. This can be scripted if dealing with a large number of projects.

9. Create a new repository directory to hold all the projects

10. Merge each individual project into the new repository directory

Next, each project git repository will be merged into the final repository by repeating the following steps.

You can now discard the initial commit.

Finally, move your repository into the Git server everyone shares. This example assumes you've already set up SSH keys in order to remotely connect.

Now that the conversion is completed.  We can easily stop and clean up this Vagrant instance.

There were a couple of issues I ended up dealing with after the conversion was completed. Some of these was just getting familiar with Git and some of them involved the IDE tooling for Eclipse. The restructuring of the project has an effect on how you view history with Git. By default, Git will not display any history before the point of a resource move. So in order to view old history, I had to specify '--follow' for the Git log command. Also, when viewing history in Eclipse using EGit, I was not able to do comparisons or completely view an old revision of a file before the resource move. This is a known problem and will hopefully be fixed soon. In the meantime, I can use other tools to make file comparisons, so it's not a deal breaker.

And that's all folks!  I hope this blog shows not only a quick solution for coming up with an environment in which to make this CVS to Git conversion, but also some of the thought processes involved with structuring your converted projects into Git repositories. Using tools like Vagrant gave me the opportunity to repeatedly try out different scenarios with an easy way to clean up and restart the whole process with just a few keystrokes.  Give it a try!

Special thanks to Scott Smith, Michael March and Kevin Brandon for discussing with me all things Git.