The Relevance of Supporting IE8 (Like it or not!)

*Apologies to Opera users, you used to be on the list but the market share was too low to target Opera specifically. 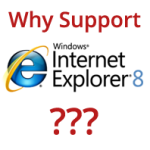 What browsers should you support? What versions of those browsers should you support? All of them. And the versions follow up question further ups the ante. Google supports the three latest versions of any browser and draws the line there. This means that as of this writing (5/2014), even IE9 is no longer supported by them. With modern browsers having auto upgrade capabilities, they can easily be maintained by the end user or corporate infrastructure team. But with IE, we run the risk of running on Windows XP and IE8.

It is easy for the high and mighty designer to say, “I only design for the latest and greatest”. And it is certainly the most fun - hands down. But it is also extremely arrogant and short-sighted to take an approach that sells the end user short. All me to tell you why.

Believe it or not, there are still corporate infrastructures forced to use Windows XP and IE6 or just simply stuck and capped out on XP and IE8. Right or wrong, they invested a great deal of time and money to build applications on the premiere browser of that time period, mostly in ActiveX because Microsoft heavily supported it and it was remarkably stable. Their entire corporation has been entrenched in Windows XP for over a decade with applications mired in IE6. And now, with Windows XP support sunsetted by Microsoft, they are looking square in the face of inevitability. No more security patches for them, no more putting it off, time to bite the bullet and pony up for the company wide upgrades. Which means upgrading hardware as well, so in some cases we’re talking millions of dollars. That’s a tough pill to swallow, especially for non-tech companies with a tech illiterate steering committee.

It is safe to say that even with Microsoft’s forcing the issue, many companies will still not upgrade, believing what they have works and is good enough. Even in the wake of the Heartbleed bug, this pill is so tough that we will continue to see at least IE8 in our site metrics for a few more years. Current consumer metrics show that IE8 has a higher browser market share than IE9 and 10 combined. That’s just consumer metrics. We don’t have access to corporate metrics because they are not reported.

So now you’re asking, “how is that my problem?” The answer is simple... conversions. Why do you have a site or an online web application? Another simple answer, to convert visitors in some manner.  So imagine if you will the corporations looking for your organization’s services, either to contractually save them or to hire you individually, and that they’re using a horribly outdated browser.

I think we can all agree that we’re not about to support IE6 for so many reasons. But supporting IE8 is not out of the question. And given the metrics, it is still worth your time to do so. The easiest solution for maintaining support for IE6 is to use the Universal IE6 CSS stylesheet and be done with it... if you felt inclined to do anything for it at all. You could use this for your IE8 solution as well, but given such widespread use of IE8, you would be better served by either adding a conditional stylesheet if needed or using the single stylesheet to accommodate all browsers. I would steer you towards the conditional stylesheet so you can knock yourself out for the other browsers.

Overall it falls to the user experience designer to push for support of this. The likelihood of a project steering committee for publicly accessed sites to know about the need is unlikely.