When Michigan State University Federal Credit Union (MSUFCU) first implemented Jira Software and Confluence on Atlassian Server, their primary goal was to get the tools up and running quickly. They took an intuitive, learn-as-you-go approach and soon began realizing benefits and efficiencies. As with many organizations, use of the tools grew organically over time. Without formal governance in place, significant inconsistencies in the way the tools were being used by different teams began to develop, and it made working in them cumbersome.

MSUFCU found that they had too many similar workflows—often there were a dozen or more, each with only one small difference—and this made it challenging to make even minor updates, like adding a status. Every small change had to be made manually across dozens of individual workflows. Further, the lack of consistency around nomenclature had resulted in a huge number of different statuses, many using different terms for the same thing. This made it difficult for team members to work across multiple projects.

The organization’s on-staff administrators could identify the issues at hand, but due to complex dependencies, they were unsure of how to fix them, and attempts to do so often caused more problems than they solved. MSUFCU soon recognized that they could benefit from a more strategic and structured approach—they needed to clean up their system to get it running more efficiently and in preparation for an eventual migration to Atlassian Cloud.

After an in-depth discovery process, Isos Technology mapped out a strategic approach aligned to MSUFCU’s long-term goals. They identified two primary workstreams: efforts related to cleaning up MSUFCU’s Jira instance and getting it running more efficiently, and efforts related to a planned migration to Atlassian Cloud. There were dependencies between the two initiatives, but Isos staged the work on parallel paths, rather than consecutive ones, so that MSUFCU could quickly begin benefitting from cleanup activities without waiting for them to be complete before the migration could occur.

Isos Technology identified and deleted obsolete and redundant projects and workflows, and consolidated the remaining ones, which increased day-to-day efficiency for all users. They established consistent nomenclature across the instance and consolidated statuses so users can work across different projects without confusion. And they automated complex, manual processes using Automation for Jira, which saves time and enables MSUFCU’s Jira administrators to focus on higher-level tasks. 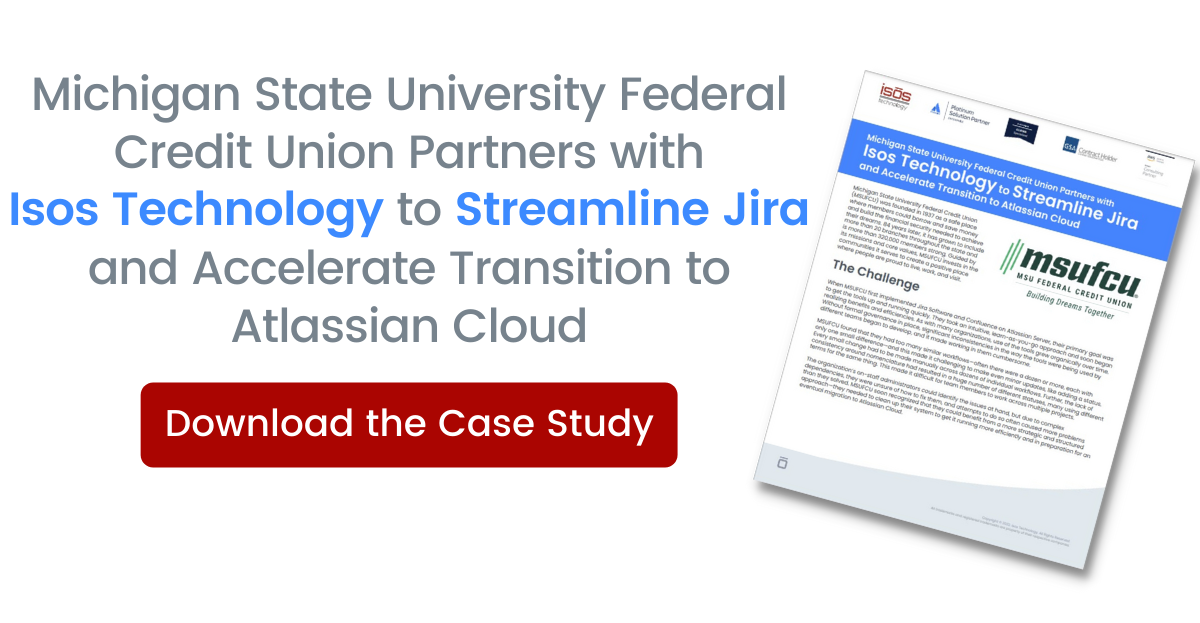